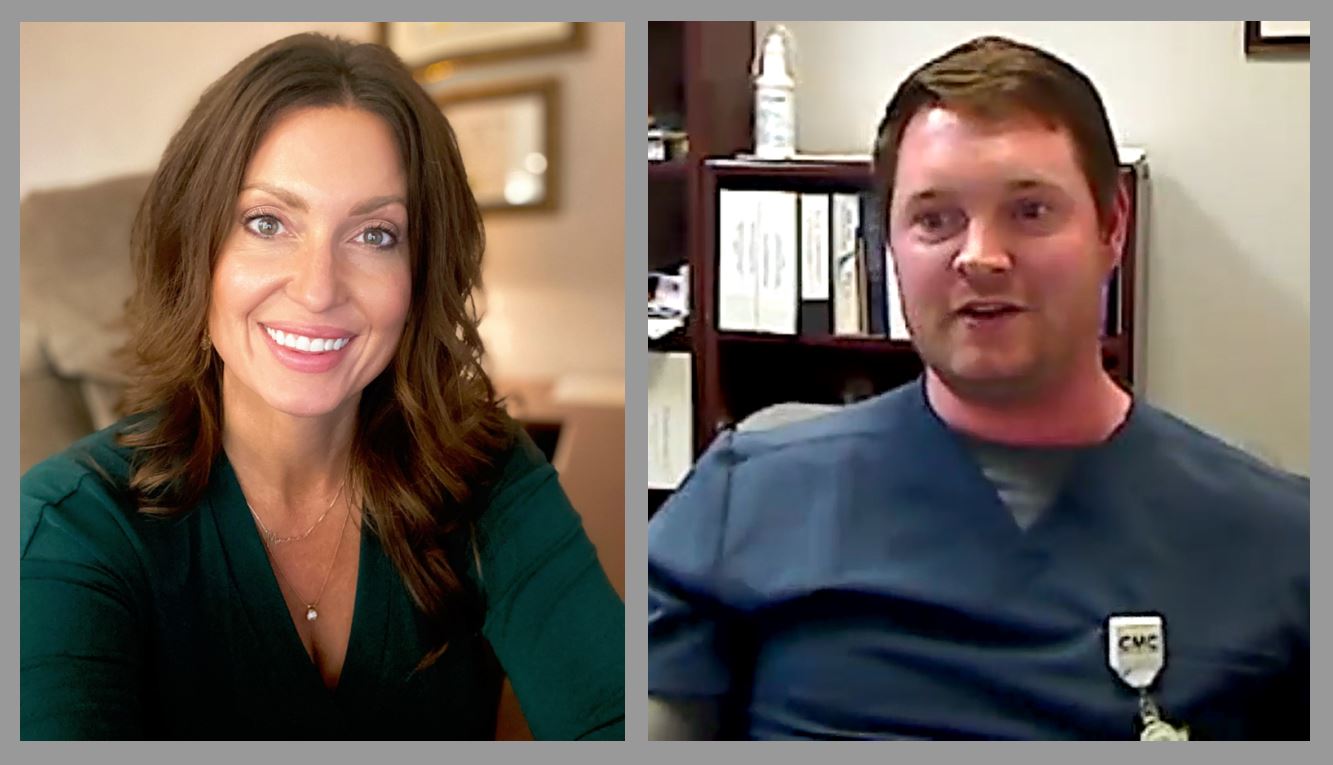 Two DOPs Deal With Operations, The 340B Program, And Drug Manufacturers’ Restrictions

ProxsysRx recently organized an introductory Zoom meeting between the DOPs of two health systems we serve.

Southwest Mississippi Regional Medical Center’s (SMRMC) Tiffany Poole earned her Doctorate of Pharmacy degree from the University of Mississippi in 2006. A ProxsysRx pharmacist since 2018, she joined SMRMC (in McComb, MS) as an oncology pharmacist in 2016 — and was promoted to Director of Pharmacy in June, 2021.

Andrew Wright graduated from the University of South Carolina College of Pharmacy in 2015, and joined Conway Medical Center (in Conway, SC) shortly afterward. He was promoted to DOP in April, 2022 — and was tasked, from Day One, with mastering CMC’s 340B program’s complexities, challenges, and not-inconsiderable roadblocks in the age of 340B ESP and manufacturer restrictions.

ANDREW
CMC is a private non-profit, acute care DSH (Disproportionate Share Hospital) with 240 beds. We now have 40 340B contract pharmacies, having recently added 15. I was brand new to 340B when I started, and it’s a beast.

Working with ProxsysRx, I’m genuinely amazed by how much growth we’ve had. It’s been exponential. When manufacturer restrictions hit, we saw other hospitals having record declines in profits, and we were still going up.

ANDREW
It was huge to have ProxsysRx walking side by side with me as I took over. They’ve been incredibly helpful — both for me and my boss. Having the expertise of ProxsysRx on our side, advising us, gives me the freedom to focus on my other areas of responsibility.

TIFFANY
Chance [Spivey, ProxsysRx’s 340B Program Specialist] manages our daily activity. We generally call on Heather [Brooks, RPh, ProxsysRx’s Vice President of Pharmacy Services] for policy issues, or if an issue needs to be escalated, or if we need guidance on a specific process. Honestly, I don’t know how she does it. The one-on-one attention to detail is something I did not expect from an upper tier manager.

ANDREW
What I like about ProxsysRx is the small company feel. I have immediate access to everyone I need, nearly at all times. When I email Chance, he gets back to me in a snap. That’s such a welcome change, after dealing with other groups that never get back to you.

We’ve had the same success with the Meds To Beds program ProxsysRx administers. We didn’t have the staff or the time to do it ourselves, and the impact ProxsysRx has had has been huge.

ANDREW
ProxsysRx also owns and operates our outpatient pharmacy — and our Meds To Beds program. They’ve really helped us improve our operations since taking them over. More importantly, we’ve seen significant improvement in patient care — especially with the way they follow-up with our patients after discharge. We started trending readmissions after they took over, and it’s really helping.

That said, we got hit bad by ESP, but it could have been way worse. And we have ProxsysRx to thank for that.

TIFFANY
ESP is so difficult to navigate. It’s clearly sympathetic to the manufacturers, and we are carefully evaluating what data we’re willing to send them.

ANDREW
It’s their world. We’re just living in it.

TIFFANY
They’re all huge corporations, with entire departments dedicated to figuring out how to impose their will. Sometimes it just feels like we’re being held hostage.

ANDREW
They’ve really forced us into a corner, and that’s an awful place to be when we’re just trying to take care of the patients this hospital is dedicated to serving.

TIFFANY
Not only that, they’re much better coordinated among themselves — and they work together.

In the first months, when we were ramping up with ProxsysRx, the manufacturer restrictions hit — and it nearly stopped us altogether. But with ProxsysRx’s help, we were able to turn it around. Had we not had their support and guidance, it would have been devastating for our 340B Program.

ANDREW
We don’t want to turn away patients. That’s what we’re here for. The other hospital in our area is for-profit, so they just don’t have the same dedication to serving uninsured patients the way a DSH does.

TIFFANY
And then those patients come to you guys for help. We’re in the exact same position. Our facility is the only option for so many patients. We have to find a way to serve them, and that takes our finance team and our patient care team creating a balance.

You have to keep the doors open, but our patients really are our priority — so we have to find ways to provide the care they need. That’s the whole reason Congress started 340B — to increase access to healthcare for everyone, and spread scarce resources in our most underserved communities.

Our relationship with ProxsysRx lets us spread those scarce resources further than we ever could on our own.

ANDREW
It’s allowed us to expand into areas of medicine we never thought we could offer. We’ve added a cancer center, a pain clinic as part of our orthopedic practice, a dermatology clinic, and a women’s center. We’re expanding our footprint, and we’re treating so many more patients than we used-to. Without ProxsysRx and 340B, that wouldn’t have been possible.

ProxsysRx met with Andrew and CMC’s 340B team shortly after he settled into his new position — helping them understand the 340B program, as well as their individual roles in ensuring compliance with the program’s guidelines. ProxsysRx began supporting CMC’s 340B program in September, 2022 — auditing matches and missed opportunities. This began after ProxsysRx closely examined the health system’s eligible areas to ensure compliance is maintained.

ProxsysRx’s CMC account managers answer the CMC team’s questions, while guiding them in 340B-related tasks — ranging from recertification of 340B eligibility on OPAIS and contract pharmacy agreements to TPA implementations and registration of contract pharmacies on OPAIS. We also help them ensure there are no duplicate discounts or diversion risks.

Since ProxsysRx initiated its relationship with CMC, the health system has added a significant number of child sites. We’ve also helped them add contract pharmacies appropriate to realizing 340B savings associated with these additional child sites.

Like a lot of DSHs, Conway held out against manufacturer restrictions (and 340B ESP) until it was clear that their position was unsustainable — at which point, ProxsysRx began managing CMC’s 340B ESP process for them. After just two months, they began seeing the 340B savings and revenue increases that are intended under the 340B program to support care for uninsured and underserved patients.

IT BEARS REPEATING: The 340B program was created to support the increased level of care provided to uninsured and underinsured patients at DSHs, because — by definition — they treat a “disproportionate” percentage of patients who cannot afford to pay for their healthcare. Which is, of course, why those hospitals qualify for DSH status in the first place.

ProxsysRx was already partnered with SMRMC when Tiffany joined as DOP, and we guided her through all things 340B. Since then, she’s become a genuine 340B expert — and a true champion of the program’s ongoing benefits for her hospital’s mission in the community.

ProxsysRx also guides SMRMC in adding contract pharmacies to their network, and in selecting TPAs willing to work for fair and reasonable fees. At the same time, we monitor the performance of their program, in case any of their contracts merit termination.

We use our sophisticated analytics platform to uncover missed 340B savings and revenue opportunities. At the same time, SMRMC also uses our technology —uncovering missed opportunities from their end as well.

For both CMC and SMRMC, there are ProxsysRx employees and in-house employees working constantly to ensure that compliance auditing and opportunity auditing is completed. We also help both health systems stay HRSA audit-ready at all times.

Outpatient Pharmacy Operations and 340B

In addition to owning and operating CMC and SMRMC outpatient pharmacies, ProxsysRx serves as a contract pharmacy for both hospitals — further increasing 340B savings. The hospitals designated our onsite pharmacy as the preferred pharmacy for the manufacturers who have imposed restrictions, while our Meds to Beds programs ensure those 340B savings stay within their systems.

There are so many ways to optimize 340B drug programs’ savings and benefits, while minimizing the likelihood of noncompliance — using the optimal combination of 340B software and experienced, expert support. For more information, contact Howard Hall. C: 205.588.0946 | howard.hall@proxsysrx.com